Yesterday, the Wyoming Republican Party lost a good friend. Greg Schaefer passed away surrounded by his family in Gillette. The vice-president of external affairs for Arch Coal before his retirement, Greg was involved with the party for many years. He served as Wyoming’s National Committeeman to the Republican National Committee for eight years, and was our representative on the RNC Rules Committee. He represented Wyoming well and happily, always answering roll calls with a hearty “Go Pokes!” Rest in peace, Greg. You will be sorely missed by your large Republican family.

"President Trump’s re-election team is building out its political infrastructure with a round of hires that underscores the importance the Midwest and Florida are expected to have in the 2020 election.

"The campaign has carved the nation into nine regions as it decides how best to spend its resources on contacting voters, motivating supporters and, eventually, getting them to the polls on Election Day, according to campaign officials. Each area will be overseen by a newly hired regional political director.

The Wyoming Republican Party met Friday and Saturday, May 3rd and 4th, in Riverton WY.  Friday afternoon was occupied with subcommittee meetings and on Friday evening, the Fremont County Republican Party hosted a meet and greet that gave the state party voting members to visit with candidates for state party Secretary, Vice-Chairman, and Chairman. The Riverton High School Jazz band provided an entertaining ensemble for the evening.

Americans have always found power and unity through prayer.  In 1988, the Congress, by Public Law 100-307, called on the President to issue each year a proclamation designating the first Thursday in May as a “National Day of Prayer.”

In their infinite wisdom, the United States' Founders created the Electoral College to ensure the STATES were fairly represented. Why should one or two densely populated areas speak for the whole of the nation?

The following list of statistics has been making the rounds on the Internet. It should finally put an end to the argument as to why the Electoral College makes sense.

Fox News: Bigger Paychecks and A Booming Economy Thanks to GOP Tax Cuts

April 16, 2019
"Tax day has long been the worst day of the year for American taxpayers, bringing us face-to-face with the reality that our government takes too much of our hard-earned money. However, thanks to the Trump administration’s historic Tax Cuts and Jobs Act, tax day has become less of a burden – and a good time to reflect on how much more of our own money we get to keep in our wallets.

"When it comes to the future of America’s energy needs, we will find it, we will dream it, and we will build it." Donald J. Trump

Read the entire story at: https://www.whitehouse.gov/briefings-statements/president-donald-j-trump-paving-way-energy-infrastructure-development/ 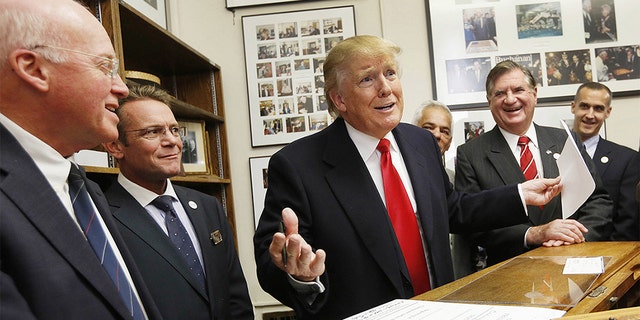